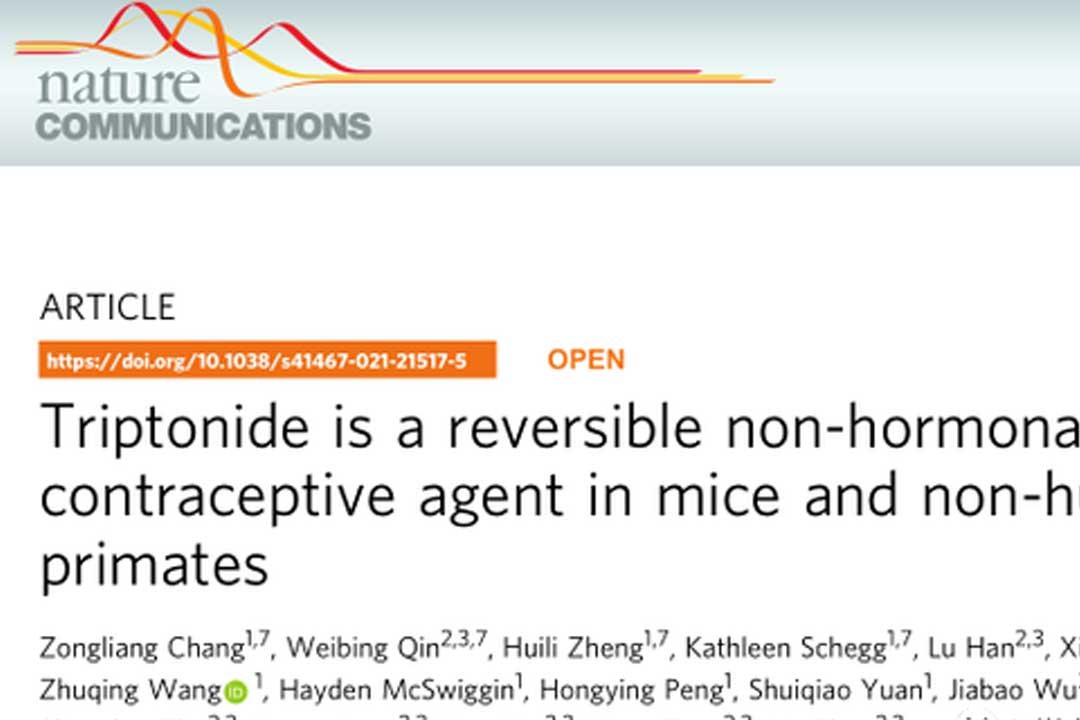 Recently, China Guangdong Health Online learned from China’s Guangdong Provincial Family Planning Specialist Hospital (Guangdong Provincial Institute of Family Planning Science and Technology) that the research team of Tang Yunge and Qin Weibing, the key laboratory of male reproduction and genetics of the National Health Commission of the People’s Republic of China, joined the University of California in the United States. The professor’s team has made a major breakthrough in the research and development of non-hormonal male contraceptives. The study found that triptolide ketone extracted from the Chinese herbal medicine Tripterygium wilfordii is a non-hormonal male contraceptive candidate with great transformational application prospects.

The relevant research results were published online in the world-renowned journal Nature Communications. The publication of this achievement marks that Guangdong Province is in the forefront of the world in the field of male contraceptive research.

It is understood that women undertake about 2/3 of the tasks of contraception and birth control worldwide, and social surveys show that more and more men are willing to share this social obligation.

Tripterygium wilfordii is commonly used as a traditional Chinese medicine for the treatment of rheumatoid arthritis, nephritis, lupus erythematosus, etc. In the process of treating diseases, long-term use can cause male infertility, which has attracted the attention of researchers, trying to find “anti-sperm” components from Tripterygium wilfordii co2 extracts.

The study began in 2009. In 2012, the research team found that triptolide ketone extracted from Tripterygium wilfordii has good contraceptive effectiveness and reversibility in male rats.

In 2015, in order to further test the efficacy, reversibility, and safety of the drug in primates, China’s Guangdong Provincial Family Planning Hospital and a scientific research team composed of professors from the University of California, USA, began five years of arduous scientific and technological research.

Experiments prove that “anti-sperm” ingredients are safe and effective

After nearly 10 years of research, the research team discovered that triptolide can act as a potential non-hormonal male contraceptive. Oral administration of triptolide ketone can induce sperm deformity in male rats and male cynomolgus monkeys, so that sperm motility and fertilization ability are lost, so as to achieve contraceptive effect.

Tests have shown that this method is nearly 100% effective and has no obvious side effects. Once the drug is stopped, male fertility can be fully restored and normal offspring can be produced.

The study also preliminarily explained its target and contraceptive mechanism, and it is believed that triptolide is a non-hormonal male contraceptive candidate with great translational application prospects.

It is reported that China’s Guangdong Provincial Family Planning Specialist Hospital will carry out the next step of research, accelerate the transformation of scientific research results, and start the preliminary preparation for the clinical trial of triptolide ketone, in order to develop a safe, effective and reversible human male contraceptive as soon as possible, and better to benefit mankind.